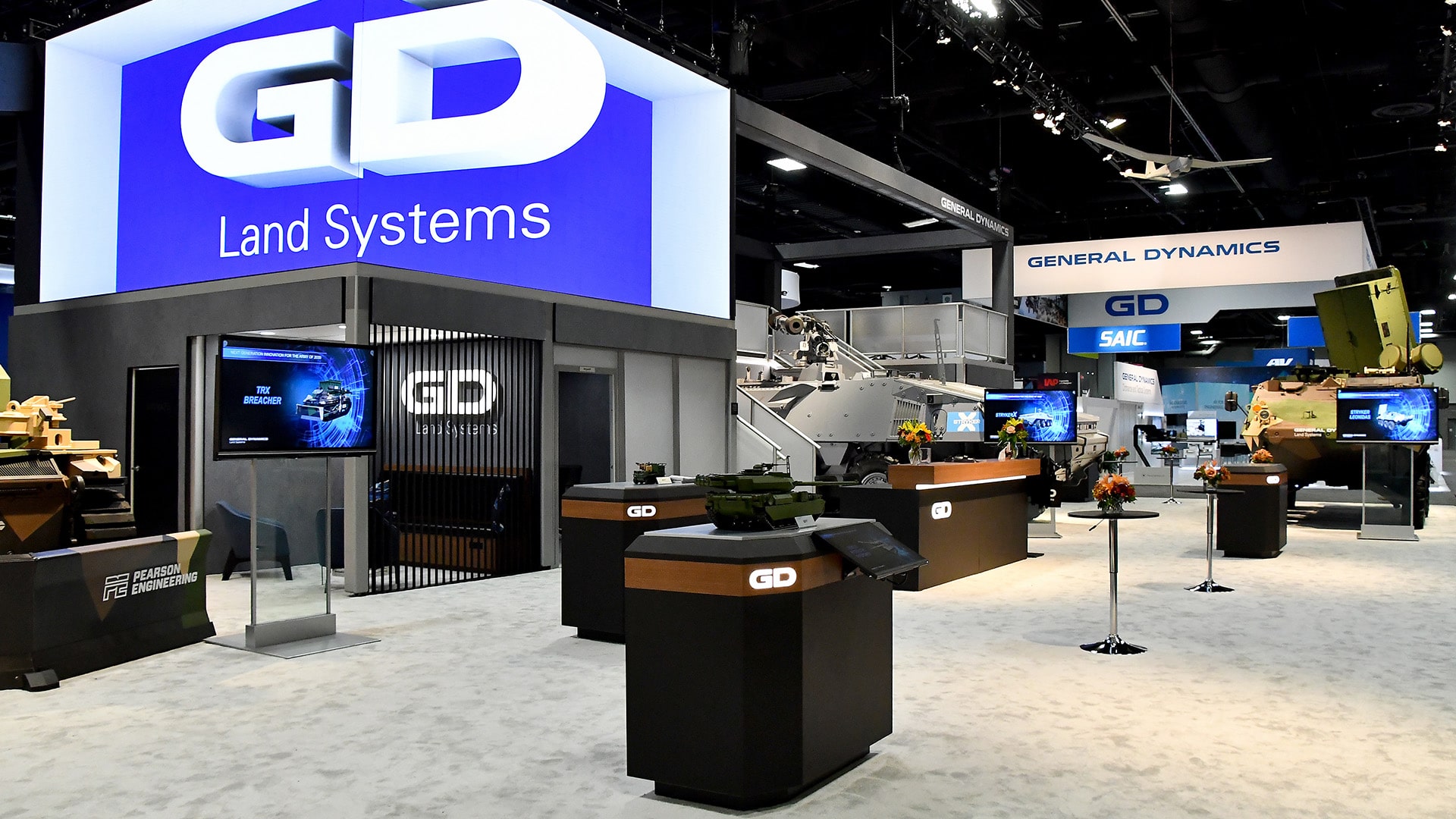 The next generation Abrams Electric/Hybrid tracked vehicle. The next generation Stryker Electric/Hybrid wheeled vehicle. The high-power microwave technology addition to the Stryker Leonidas. These are just a few of the serious military products the General Dynamics Land Systems (GDLS) team were set to debut at the 2022 AUSA Annual Meeting. And for that, they needed a serious partner, EEI Global, to create a display matching the gravity and wow factor of the products they showcased. 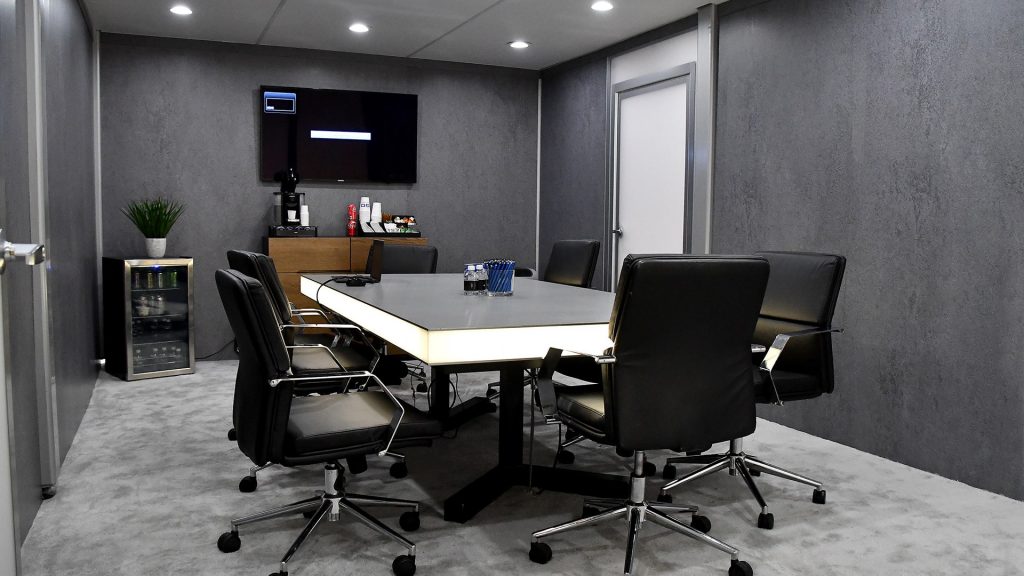 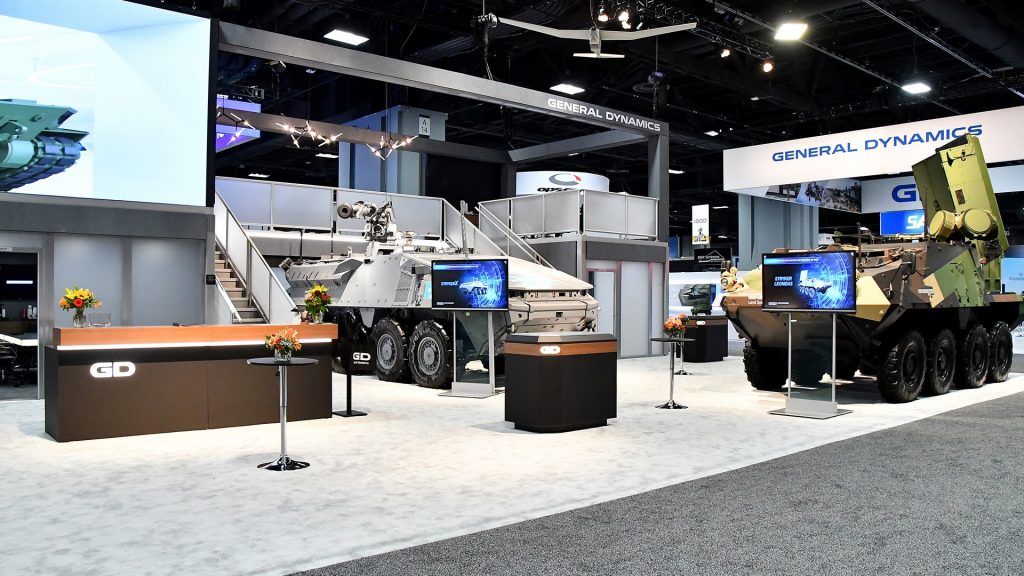 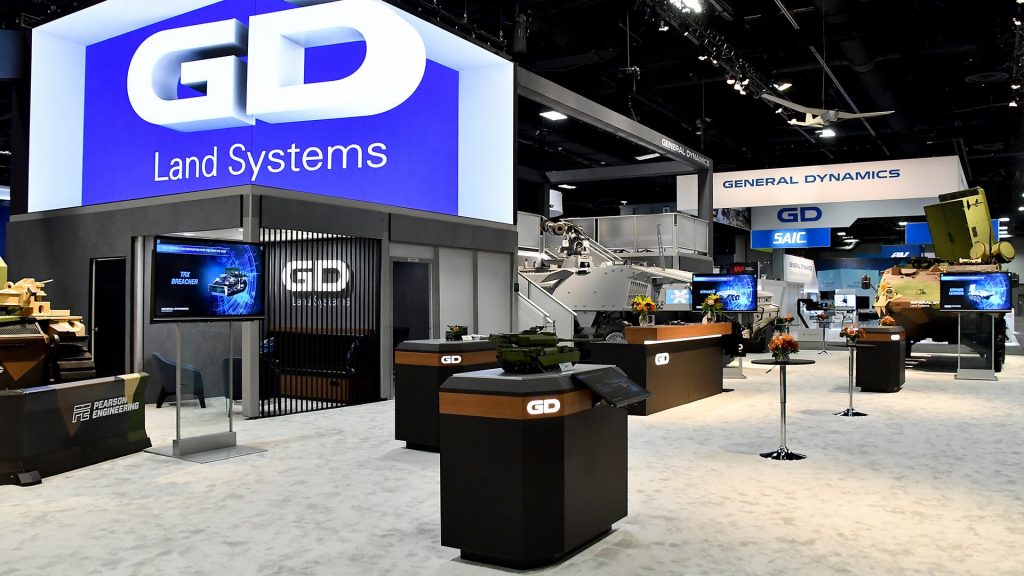 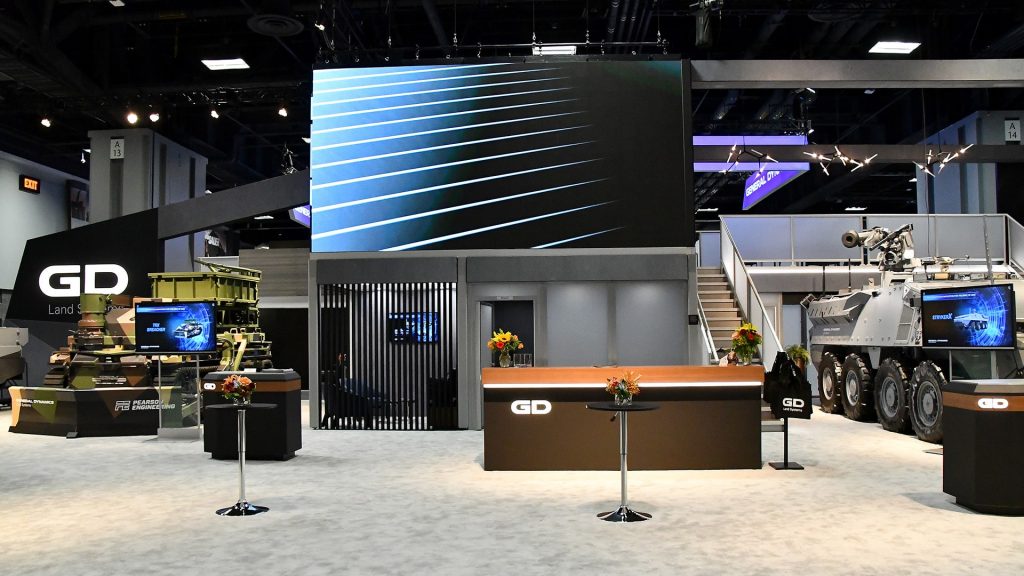 With EEI Global’s years of experience in creating innovative designs for the AUSA show, as well as our proven success in coordinating the many intricate aspects of executing a military show like this one, the GDLS project was grounded in a strong foundation. With the goal of making an unforgettable impression for these cutting-edge products and technologies, the creative vision of the EEI designers soared.

The design made ingenious use of the doubled booth space GDLS had secured for the 2022 show. A multi-story structure covered in 18’ x 19’ LED screens flanked one corner, and for the high-tech interactive wow factor, featured Anamorphic Illusion Technology. Anamorphosis is the art of bending images through optical illusions, requiring viewers to stand at a certain angle to see the finished work. What guests saw was a tank turret turning and appearing like it was coming out of the screen. Sensational.

The double-deck structure of the display offered great views of the show floor from all directions, while showcasing four imposing military vehicles and housing three private conference rooms and two semi-private meeting spaces. Under the middle of the deck structure, guests encountered the Stryker X vehicle. They could climb inside to see a live technology demonstration that played out on the cockpit monitors. Outside the Stryker X, the demos were mirrored on six additional monitors positioned above the back of the vehicle as audio speakers carried the live presenters.

The display design also marked new branding for GDLS, shifting from white and blue brand colors to black, gray, and brown. EEI carried the new brand voice throughout the display footprint with graphics and other tie-ins to a new campaign that had been launched in advance of the show. The overall effect was more than just a color shift; it was a mood shift to a more commanding tone.

Designed to make a serious impression and generate buzz for the General Dynamics Land Systems brand and new product line, the EEI Global team’s display struck its target at the 2022 Association of the United States Army Annual Meeting. It became one of the most talked-about booths at the show, impressing visitors with its multi-layered portrayal of GDLS innovation.